Adrian Walters was quick on the draw when entries opened for Airlie Beach Race Week 2021; his fun and fast Rob Shaw 11 Metre design, Little Nico, was the first entry received by the Whitsunday Sailing Club (WSC) and other boats that are speedy on the water closely followed suit.

Walters, from NSW commented, “I’m not surprised we’re first; I like to be organised. We’re coming back because I had so much fun last time we were there (2017).” 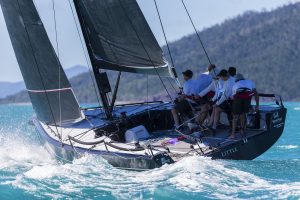 The Middle Harbour Yacht Club sailor can credit his boat manager, Mitch White, for being first in. White, who has been around the sailing scene for a long time, has run Little Nico’s boat program for years.

“We’ve come off a win at the Sydney Harbour Regatta in March, so we’re going to try to continue our winning streak at Airlie Beach, then Hamilton Island and Magnetic Island Race Weeks. We’re looking forward to some good competition to start us off at Airlie Beach again,” Walters stated.

Two Queensland Extreme 40s, Back in Black and Angus were among the earlier entries which have already surpassed 60 at this early stage. A leading light of the Extremes in Australia, Michel Van Der Zwaard (Back in Black) finished second to Dale Mitchell’s ORMA 60 in the Multihull series last year. The two finished on equal points, but Mitchell won the final race to claim the spoils.

There is more at stake in 2021, as Airlie Beach Race Week is hosting the Australian Multihull Championships for a second time. And to that end, Van Der Zwaard has entered two Extremes and expects at least five to be on the start line in August.

“We are still training crews and there are quite a few who are capable of being skipper,” the Whitsunday Sailing Club member said in relation to who will skipper Angus.

“We are lucky to be here sailing the Extremes and to have so many – and the people to sail them. At least once a week Back in Black and Angus will be racing each other and we will mix the crews around. There are many good sailors who haven’t sailed these boats before, so they are just getting used to it. 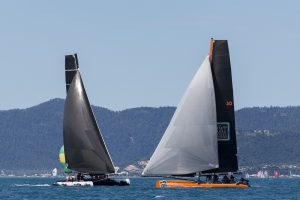 “Our boats are out of water getting ready to race while we learn and build teams. We have about 15 people on the team, mostly locals, and we are having lots of fun. Airlie Beach is a great place to sail – we love sailing here,” the multihull sailor ended.

Van Der Zwaard is not taking his competition lightly and he knows the renowned multihull sailing brothers, Dale and Paul Mitchell will turn up among the crews. The Extremes will also face in-house competition from each other, including Mike Peberdy’s High Voltage from Royal Queensland Yacht Squadron.

They will also fight it out for the spoils with other early Division 1 entries. Among them is regular, Darren Drew with his Crowther 50, Top Gun (NSW) and two South Australian Farrier trimarans; Gerald Valk’s Crosshair and Peter Hawker’s Carbon Credit.

George Owen has entered his F28, Charleston, with which he claimed fourth place last year. Owen, from Southport, already has a number of multihull trophies in the cabinet, including wins in Asia, and is expected to put his best foot forward this year.

Entries to-date across all divisions have been received from Queensland, NSW, South Australia, Tasmania and Victoria, many breaking free of  COVID restriction for the first time.