Sunday afternoon saw sun shining and a moderate easterly breeze blowing for the 11 yachts who participated in the two Whitsunday Sailing Club races on Pioneer Bay.  With everyone sailing the same course, it was a chance to observe the speed difference between an Extreme 40 and a trailable yacht such as a Masrm 720.

Race 1 saw the extreme 40 Back in Black (Paul Mitchell) leading away from M32 World (Michel Van Der Zwaard), with the third multihull, G’nome (Terry Archer) and the lead monohull, Treasure VIII (Rob Davis) heading the pursuing fleet.  Close competition in the mid fleet saw Wide Load (Shannan Hart), Good Vibes (Robert Holme) and Twister (Kevin Fogarty) together,  with Infarrction (Carol Roberts) and Anthea (Dewi Hughes) not far away.  As the leaders completed their third laps, the rest of the fleet were still on lap 2, with Back in Black completing the 6.5 mile course in 49 minutes. On corrected time, Lama (Darren Lynch) took the honours, even though they were the slowest boat on the water, with Back in Black second and G’nome third. 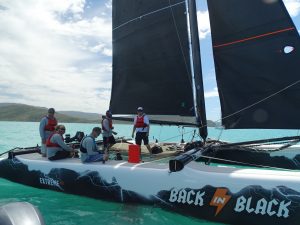 The second race saw the entire fleet bunched up on the starting line for a very competitive start.  This time the fleet stayed much closer together, although with a stronger wind blowing, the race was generally quicker for all boats, with Back in Black dropping the elapsed time to 40 minutes, with the rest of fleet being similarly faster.  Although positions on the water changed little,  the corrected time results were much closer, with G’nome taking the honours in race 2 from M32 World and Back in Black.

Overall winners for the day were G’nome with a third and a first (4 points) from Lama, based on a count back over Back in Black (5 points)and M32 World (6 points).

Full results can be seen at https://app.sailsys.com.au/club/85/results/series/577/races.